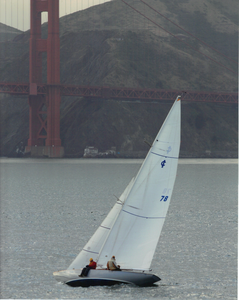 Lon Price, a prominent local yachtsman, is credited with founding the IOD Fleet in San Francisco in the early 1950s.  Lon saw a photo of one of these beauties under sail, and decided this was the next yacht for him.  He found one for sale in Southern California (of all places – there has never been an IOD fleet there!) and brought it to San Francisco in 1952.

After a few years of “racing handicap” in the old YRA Division 9, Lon succeeded in promoting the IOD sufficiently that in 1954 there were six boats in the Bay.  Initially, all the boats were imported “used” from other fleet locations.  As the boats arrived in San Francisco, they were assigned sequential sail numbers by Lon starting with #75.  Most of the initial owners had previously crewed with Lon on Norena (#75); including Bill Barnett (#76), Bob Vidmar (#77), Everett Witzel (#78), and James Yost (#79).

The first meeting of the San Francisco Fleet (organizational meeting) took place on November 19, 1954, at which the above-named owners of #75, #76, and #78 were elected fleet officers with Lon as chairman.  A plan was adopted to obtain official recognition as a one-design fleet by the YRA of San Francisco Bay for the 1955 Season (subsequently accepted by YRA).  The new Fleet also adopted fleet regulations and bylaws patterned after documents provided by the Long Island Sound IOD Fleet (a one-page list of “exceptions” was added to reflect San Francisco’s special needs).  IOD Fleet #4 was GOOD TO GO!

Many of the early IODs in San Francisco were imported from Norway after Lon established contact with Bjarne Aas and other brokers there.  His strategy was to maintain frequent communications with these brokers about boats that were for sale, so that whenever a San Francisco sailor expressed interest in an IOD, Lon was ready to facilitate the transaction.  Flirt (#80) was imported from England in 1955 and Corona (#81) arrived the same year from Norway.  Hajo (#82) arrived months later and raced for the first time in the 1957 season.  Lon sold his IOD in 1957, but it was his energy during the preceding five years that put the fleet on the map in San Francisco Bay.

During the first two years, Lon Price dominated the winner’s circle, but Bob Vidmar (#77) soon became a frequent race winner.  In 1958, the name Frank “Jake” Wosser began appearing regularly at the top of the “race results” in local newspapers.  Wosser continued to race Rutsan (#79) in the IOD Fleet for the next 18 years, during which time he won the season championship 11 times.

“Lon Price made a sweet deal on the original purchase of Norena (#75) in Southern California:  He bought it from an insurance company for only $1,200 (and it had been dropped just once!).  Needless to say, Lon was the first to add the jock-strap re-enforcement at the mast location…”

“During a cruise from Sausalito to San Francisco:  With skipper Bud Gilson (second owner of Norena, #75) entertaining his lady friend below, the “motor well plug” was removed by an inexperienced crew at the helm.  The boat started to sink, and the crew threw the outboard motor overboard to lighten ship…”

“Leaking boats have forever been a problem in San Francisco:  During a windy race, as the water rose to the level of the cabin benches down below, Mel Harvey’s kids played excitedly with their toy boats in the ever-widening lake in the bilge…”

The San Francisco fleet grew rapidly in the period from 1958 to 1961, and there were seventeen IODs on the Bay to start the 1962 season.  The SF fleet officers received a lot of coaching from Bill Johns, a prominent leader in the LIS fleet, and in 1961 SF competed at the IOD Worlds for the first time.  In 1963, Fleet officers received permission to host the 1965 IOD Worlds in San Francisco, at which time there were 21 IODs in the Bay of which four were new direct from the Aas’ factory in Norway.

Another major change on the racing scene was a big increase in the number of races being run each season.  Up until the 1960’s, there were typically less than 10 races during each summer season, mostly sponsored by the local YRA.  In the late sixties, the IOD class joined with two other like-minded local groups (the Knarr and Folkboat classes), and together they organized more special events and were racing twenty-five to thirty-five weekend races each summer, plus a dozen more Wednesday evening races.  The heavy schedule took it toll on the boats however, as excessive boat maintenance caused by the blustery conditions became too burdensome for many owners.

From 1965 to 1973, the IOD Worlds was won by a San Francisco skipper four times (Wosser in 1965, 1966, and 1973; and Bert Damner in 1969).  These were the peak years for the local fleet, from the standpoint of both participation and reputation.  As a local tradition, all San Francisco IOD spinnakers have been identical in color configuration, so everyone on the Bay knew when the IOD class was on the race course.  It was an exciting time to be racing IOD’s in San Francisco….