International One-Designs Were Conceived Out of Love 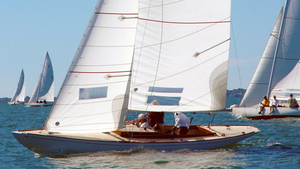 It was a classic case of coup de foudre, as the French call it: love at first sight.

The year was 1936, and the Larchmont (N.Y.) Yacht Club’s famed racing skipper, the late Cornelius “Corny” Shields — dubbed “the gray fox of Long Island Sound” for his competitive spirit and wily knowledge of the Sound’s tricky tides and weather — was racing in Bermuda when he caught sight of a brand new, 6-meter yacht, “Saga,” built by Norwegian boat designer Bjarne Aas.

“The minute I saw Saga, I fell in love with her,” Shields later wrote. “I thought she was the most beautiful boat I had ever seen. I loved her shape, her sheer, her dainty transom, and her long, straight counter. It was terrible. All I could think about on the way back to the States were the lines of that darned boat. She literally haunted me.”

With an eye toward replacing his aging home fleet of Sound Interclubs with more modern vessels, Shields contacted Aas and asked him if he might consider creating a new class of One-Design boats along the same lines as Saga, though somewhat shorter than her 37 feet. (Confusingly, the term “6-meter” does not refer to the boat’s length, but its designation under the “International Rule,” a complex, yacht-racing formula involving waterline length, hull configurations, sail area, and other factors.)

The result of this fateful alchemic collaboration was the 33-foot International One-Design (IOD) racing sloop, a boat with “lines as clean as a smelt’s and each and every line perfect for its purpose,” as the late English boat-builder Uffa Fox described Aas’s creation. The boat’s full-length, edge-glued planking of Oregon pine (later, African mahogany) was so elegantly and seamlessly crafted, her hull looked “like the side of a porcelain bathtub,” as Shields recalled.

Of the nearly 300 original wooden One-Designs built by Aas between 1936 and 1970, together with later fiberglass models made in Maine and Bermuda after Aas’s death in 1983, around 150 still race in a total of a dozen yacht clubs around the world from Bermuda to Norway, Sweden to the British Isles, in Nantucket, Marblehead, Northeast Harbor, and Long Island Sound. Recognized as among the best IOD sailors the world over are theowners of the Fishers Island Yacht Club’s fleet of 11 One-Designs, which sail out of West Harbor.

“No question, we have the most competitive fleet in the region,” said FIYC member Kevin Farrar, 2004 International One Design World Class Association World Champion and co-owner of “Kahoutec,” a 1959, Norway-built wooden IOD. Indeed, since the first One-Design came to Fishers, in 1983, the club has won six world championships, more than any other American yacht club and second only to Bermuda’s record of 11 during the same time frame.

While modern racing yachts of similar proportions could easily leave IODs in their wakes, FIYC member and three-time world champion Charlie Van Voorhis said the class still has its advantages, and challenges.

“For me the biggest challenge is tuning the rig and trimming the sails so the boat can literally sail itself. That is the Holy Grail,” he said after a recent regular Saturday IOD race. “We are not always successful getting there, but every time we are, it is enormously satisfying, and always very fast.”

But perhaps the IOD’s greatest virtue is reflected in her very raison d’etre, as Shields envisioned it: a class of boats “as nearly identical as possible, [for] it’s only in a one-design class that a skipper’s real abilities can be measured,” he observed.

Aas, a meticulous boat-builder, understood and adhered to Shields’ objectives. When measuring the weight of Aas’ original 25 IODs, Norwegian Veritas (Norway’s equivalent of Lloyd’s) found less than a 20 pound differential in any one keel. Sails were (and are) strictly limited to one loft (sail-maker), while the size, weight, and design of major fittings (always a contentious issue among racers) are also strictly controlled. So identical were Aas’s original boats that all his original oak keels warp slightly to the left, the result of sunlight streaming through a bank of windows along one side of his shop.

Today’s IOD World Class Association rules are as tightly regulated. Still, the idea is to simply enjoy the boats for what they are, according to Jennifer Parsons, co-owner of Norwegian Wood, an original 1959 Norway-built IOD.

“They are just gorgeous boats,” she said, brushing aside all male, macho, sea-bluster about being the best, from the rocky shores of Maine to the pink-sand beaches of Bermuda. “They are classics, and a joy to sail.”