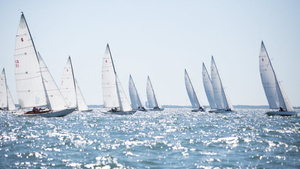 With a bullet in the eighth race, Jonathan Farrar of Fishers Island, NY clinched the International One Design World Championship with a race to spare, winning the title earned by his father Kevin eleven years ago.

Farrar won three of the nine races in the fourteen-team regatta on Nantucket Sound to finish one point ahead of last race winner Martin Rygh of Norway. North East Harbor sailor John Henry placed third, ahead of local champ Robert Constable of the host Nantucket fleet.

The five-day championship (Sept 14-18) was hosted by Nantucket Yacht Club with their evenly matched fleet of fifteen IODs. The boats were rotated among the teams after each race. Six teams won at least one race in the regatta, which included entries from six countries.